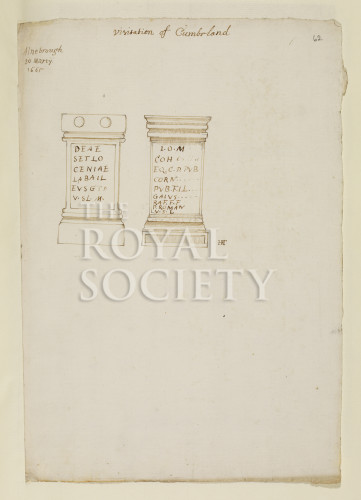 These are copies made by Henry Hunt in 1684, under the direction of Martin Lister, of drawings of monuments and inscriptions found in Cumberland and Westmorland made during a heraldic visit (1664-65) by William Dugdale (1605-1686) as Norroy King of Arms (jurisdiction of England North of Trent). The drawings from which Hunt made the copies are now in London, College of Arms, MS C. 39. For Gregory King’s (1649-1712) role as clerk and draftsman for William Dugdale, see J. Hoppit’s entry in ODNB.

Monogram of Henry Hunt.
Transcribed by the Making Visible project

At the meeting of the Royal Society on 30 April 1684, 'Dr. Lister acquainted the Society, that Sir William Dugdale having several Roman antiquities in his books not yet made public was willing, that the Society might peruse them, and take draughts of them: Upon which the doctor was desired to return the Society’s thanks to Sir William Dugdale, and to take the trouble of giving directions to Mr. Hunt what he should copy' (Birch 4:291).