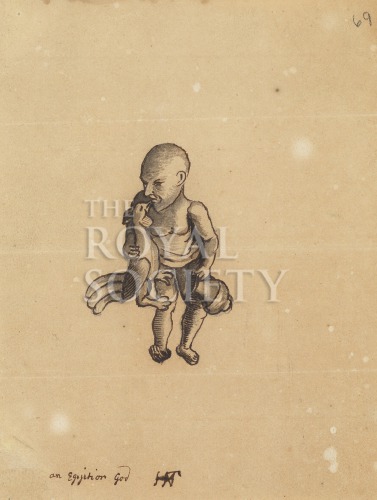 Drawing of a small brass figure holding a cockerel in one arm and a pot in another, signed by Henry Hunt and described as 'an Egyptian God'. This object was brought by Edmond Halley to a meeting on 25 May 1692, at which its identity was variously conjectured: Halley thought it was an Egyptian god, Thomas Henshaw a figure of Aesculapius, and Sir John Hoskins one of Priapus.

At the meeting on 25 May 1692, 'Halley produced a small brass Image having a cock in one hand and a water Pott in the other, it was said to be Egyptian. Mr Henshaw supposed it to be an Image of Esculapius, Mr Hunt had drawn the figure thereof, which was ordered to be kept by him. Sr John Hoskins supposed it might be the Image of Priapus' (JBO/9/ 86).