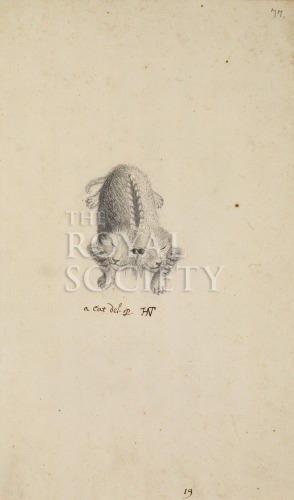 A drawing of a 'monstrous' kitten, with inscription, by Henry Hunt. It was shown on 30 June 1686 to the Royal Society, where it was described as 'having two faces joining together at the eyes'.

Under the drawing: a cat del. Per HNT.
At the bottom: '19'
Transcribed by the Making Visible project

At the meeting of the Royal Society on 30 June, 1686, 'A monstrous kitten was produced, having two faces joining together at the eyes, which was in the middle of the common face, and was composed of the meeting of two eyes. Upon dissecting it was found to have but one oesophagus and one aspera arteria, the two mouths joining in one common cavity. The entrails were all single; only the spina dorsi appeared double, the compages of the bones of the skull and spine being most remarkable. It was ordered, that a skeleton should be made thereof' (Birch 4:492).