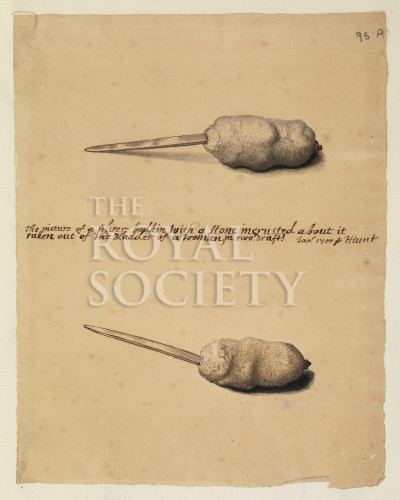 A bladder stone encrusted on a silver bodkin was shown at the meeting of the Royal Society on 17 December 1700. Henry Hunt produced a drawing of it at the meeting on 15 January 1701, when it was ordered to be coloured and Hunt was also asked to make a cast of it.

In the middle: The picture of a silver bodkin with a stone incrusted about it taken out of the Bladder of a woman, in two drafts. Jan. 1700 per H. Hunt.
Transcribed by the Making Visible project

17 December 1700: 'Mr Newey shewed a silver Bodkin, which had been put up into the Bladder of a woman and was incrusted with stone; which had been the death of the person. He was thanked, and desired to get the particulars of the story in writing' (JBC/9/238).