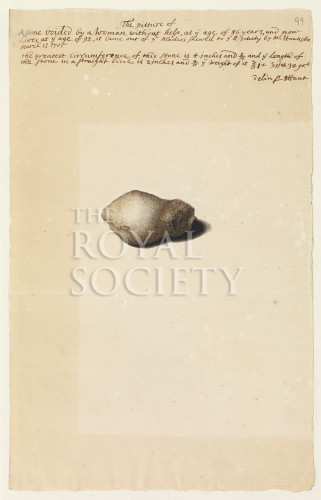 Figure of a bladder stone from an 86-year-old woman. Francis Hauksbee showed the stone at the meeting of the Royal Society on 13 March 1706, reporting that the woman was still alive at the age of 92, though now incontinent. Henry Hunt was ordered to draw the stone and take measurements, which are recorded on this sheet of paper by him.

At the top: A picture of a stone voided by a woman without help, at the age of 86 years, and now lives at the age of 92, it came out of the blader; shewed to the R. Society by Mr Hauksbee. March 13, 1705. The greatest circumference of this stone is 4 inches and 3/10 and the length of the stone in a straight line is 2 inches and 4/10 the weight of zz14 zij ap(??) 34 grs. delin per HHunt
Transcribed by the Making Visible project

13 March 1706: 'A stone voided by a woman was shown by Mr Hawksbee it was voided by her with the help of a friend when she was 86 and now is alive at the age of ninety two. She had been in pain as in Travelle two years before the voiding of it, and has now an incontinency of water. He was thanked and Mr Hunt was ordered to take the figure and weight and dimensions of it' (JBO/11/85).