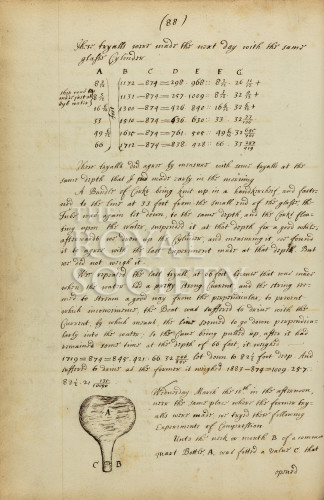 Glass quart bottle used in an experiment to condense air

A common quart bottle sunk underwater in an experiment to condense air. This was one of a series of experiments conducted by William Brouncker, Robert Moray and Alexander Bruce on the river in Chatham in March 1663, and reported to the Royal Society on 18 March 1663.

Wednesday March the 12th in the afternoon, was the same place where the former tryalls were made, we tryed these following experiments of complression.
Unto the neck or mouth B of a common quart Bottle, A, was fitted a valve C, that - [next page ripped out]
Transcribed by the Making Visible project

At the meeting of the Royal Society on 18 March 1663, ‘The lord viscount Brouncker, Sir Robert Moray, and Mr. Bruce brought in an account of the observations and experiments, which they had lately made upon the river of Chatham; and his lordship promised to add to them some notes of this own. The paper was ordered to be registered’ (Birch 1:208).