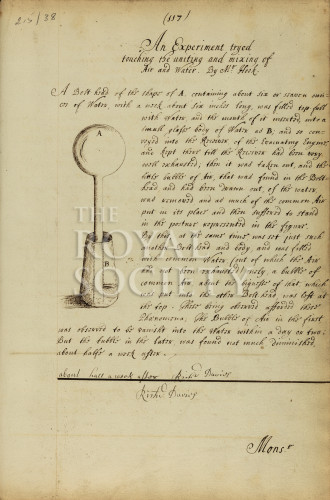 Glass instrument with a bolt head

A Bolt-head of the shape of A, containing about six or seven ounces of Water, with a neck about six inches long, was filled top-fulll with Water, and the mouth of it inserted, into a small glasse body of Water as B; and so conveyed into the Receiver, of the Evacuating Engine, and kept there till the Receiver had been very well exhausted; then it was taken out , and the little bubble of Air, that was found in the Bolt-head and had been drawn out, of the water was removed, and as much of the common Air put in its place and then suffered to stand in the posture represented in the figure.
Transcribed by the Making Visible project

At the meeting of the Royal Society on 1 July 1663, ‘Mons. Huygens’s experiment of purging water from air, to see whether it would subside, according to the Torricellian experiment, was made, but did not succeed; and was therefore ordered to be repeated at the next meeting. Mr. Hooke’s experiment for finding, whether the bubbles, that rise out of the water upon the emptying a receiver of the air, are real air, or only rarefied parts of water, was ordered to be repeated at the next meeting’ (Birch 1:268).

8 July 1663, ‘[Mr. Hooke] was ordered to give, in writing, the two experiments lately made concerning the bubbles remaining on the top of the water in glass balls, upon the emptying of the receiver; and the not subsiding of the water freed from air. The operator was ordered to get the long glass tubes raised against the next meeting’ (Birch 1:273).

16 July 1663, ‘Mr. Hooke brought in an account in writing of two experiments tried by the society, one concerning the uniting and mixing of air and water; the other concerning the suspension of defecated water in a bolt head after the receiver had been well exhausted. This account was ordered to be registered’ (Birch 1:274-75). Figure and text printed in Birch 1:275.