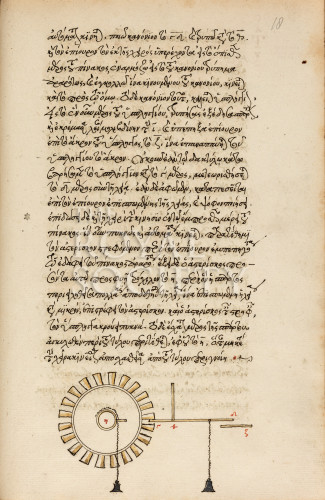 Image of weighted pulley contraption in a Greek manuscript of Automata by Hero of Alexandria, once owned by Robert Hooke. The manuscript was given to Hooke by Dr Robert Wood FRS on 14 January 1678. Hooke died on 3 March 1703, and on 28 April 1703, his niece and executor, Mrs Dellon, gave the Royal Society several natural objects and 'manuscripts in divers languages'. This illustrated Greek manuscript of the Automata of Hero of Alexandria was one of them. At the meeting, Humfrey Wanley (later FRS) stated that the MS had been 'written by Angelus Burgecius [i.e. Vergikios] a Cretan at Paris about the year 1567'.