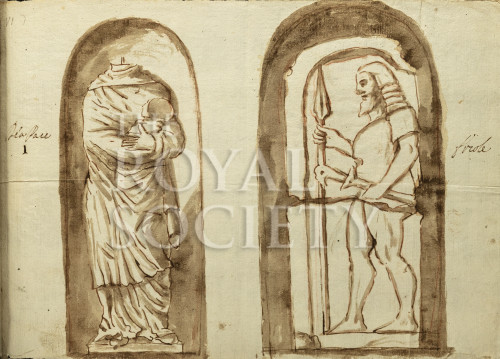 Two funerary statues, the Kourotrophos Maffei and the Stele of Avile Tite

Two images of Etruscan monuments, one of the Kourotrophos Maffei (the headless woman holding a child), and the other of the Stele of Avile Tite (the soldier holding a spear and sword). The Stele of Avile Tite was discovered in 1499 by the Italian scholar Raffaele Maffei, who housed it in his museum. (It is now in the Guarnacci Museum.)

These images are included in a portfolio of drawings and tracings of Greek, Latin and Etruscan inscriptions, objects and monuments.