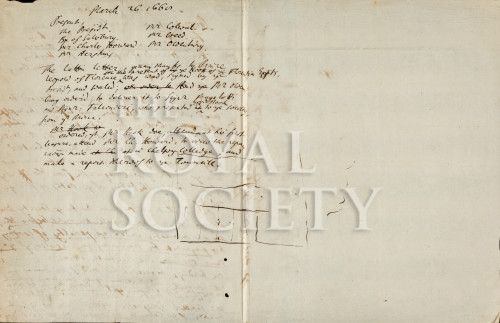 Sketch of a plan for the building of Chelsea College, in rough minutes of the council meetings.

In the first 50 years after its foundation, the Royal Society did not own its own premises. It was mainly based at Gresham College, London until the Great Fire of 1666, and again from 1673 to 1710. The years in-between, the Society was welcomed by Henry Howard, the brother of the Duke of Norfolk, at Arundel House in the Strand. Probably caused by the forced move, the Fellows of the Royal Society investigated the building of their own premises during 1667-68. Howard offered a piece of land close to Arundel House as the location for the Society's buildings. However, the financial means to make this project a success were never brought together, and the Society returned to Gresham College in 1673, until it moved to Crane Court in 1710.

ordered, that Mr Hook doe at his first leasure, attend Mr Ch. Howard, to view the reparation made in Chelsey Colledge and make a report thereof to the Councill.
Transcribed by the Making Visible project

Thomas Sprat, History of the Royal Society (London, 1667): 'The places of their Residence they have appointed to be two, One a College, which they design to build in London, to serve for their Meetings, their Laboratories, their Repository, their Library, and the Lodgings for their Curators: The other the College at Chelsey, which the King has bestow'd on them; where they have a large Inclosure, to serve for all Experiments of Gardning and Agriculture: and by the neighbourhood of the River they have excellent opportunity of making all Trials that belong to the Water' (p. 434).

Oldenburg to Boyle (14 January 1667/8): 'Sr, I cannot conclude this, without acquainting you of ye Dessein of ye Society's Councill, whereof you are a member, of building a Colledge, as one of ye most probable means of their establishment. They did, on Saturday last, consider of it in a full Councill, where H. Howard of Norfolk was also present (who intends to continue his noblenes, either by contributing to this work a good sum of mony, or by giving us ground about Arundel-house to build upon) and proceed so far as to view a draught'. (The Correspondence of Henry Oldenburg, ed. by A. Rupert Hall and Marie Boas Hall, 13 vols (Madison: University of Wisconsin Press; London: Taylor and Francis, 1965-86), IV (1967), 112.)

At the meeting of the council on 26 March 1668, 'It was ordered, that Mr. Hooke at his first leisure attend Mr. Charles Howard to view the reparations made in Chelsea-college, and make a report thereof to the council' (Birch 2:260).

At the meeting of the council on 30 May 1668, 'The president gave notice, that Mr. Henry Howard had set out the ground for building the society's college upon, viz. an hundred feet one way, and forty feet the other. Hereupon Sir Anthony Morgan was desired to draw up the conveyance of that ground, and to have it ready for the next meeting of the council; which he promised to do' (Birch 2:289).