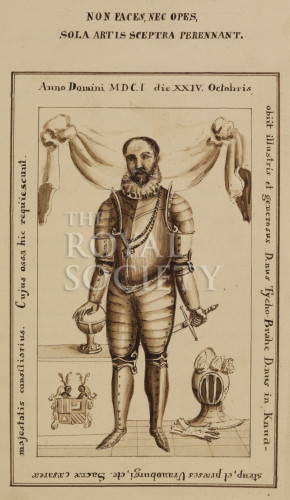 Drawing commemorating the death of Tycho Brahe on 24 October 1601. The one-page text following this drawing is an obituary of Brahe in Latin. Based on the handwriting the document seems to be 18th century, potentially a copy of a printed image and text.

Tycho Brahe (1546-1601) was a Danish nobleman and astronomer. He combined the Ptolemaic planetary system (the Sun orbiting the Earth) with the Copernican system (the other planets orbiting the Sun) into the Tychonic system. He established an astronomical observatory and alchemial laboratory called Uraniborg on the small island of Hven, between Zealand and Scania, which was Danish at the time.