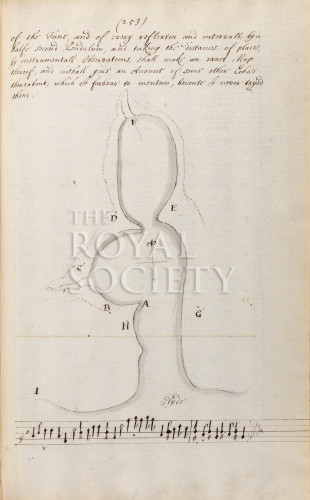 A map of Rosneath bay and musical notation.

At a meeting of the Royal Society on 3 December 1662, Robert Moray reported that he got a trumpeter at a low ground, A, facing toward C, a house built of stone, to play eight semibreves for about ten seconds. The first echo appeared to come from between B, a rocky precipice, and C; the second one from around D, a church; and the third echo from between D and E, another church. F is the head of the lake, and H, the ‘fair house’ at Rosneath, outside Glasgow.

At the meeting of the Royal Society on 3 December 1662, ‘Sir Robert Moray’s account of an echo in Scotland, was read, and his offer of having it more fully inquired into, and more exactly described, was accepted’ (Birch 1:137).