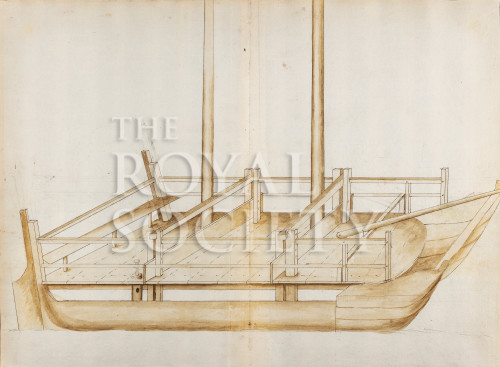 Large drawing of the structure of a double-bottomed ship designed by William Petty.

At the meeting of the Royal Society on 28 January 1663, ‘The report of the committee [of the Dublin Philosophical Society] appointed November 26, 1662, to examine and give in an account of the matter of fact concerning the structure and sailing of Sir William Petty’s new ship was read, and registered’ (Birch 1:183). The report is printed in Birch 1:183-192.

The committee assessed 'draughts' and an 'exact' model of the ship 2 1/2 foot long.

This is not a representation of the model that has survived in the Royal Society. At the meeting of the Royal Society on 29 July 1685, ‘A curious model of a double bottomed ship was presented by Mr. Houghton in the name of John Worlidge of Petersfield, which had been made some years before by his brother, Mr. Worlidge, a gold-smith at Portsmouth. A paper of the description and excellency of the vessel being read was sent with it to the repository, being first entered in the letter-book [not entered in LBO]’ (Birch 4:423-24). This is most likely the model currently in the Royal Society.

The Society appears to have had another model of the 'Experiment', whose representation by Henry Hunt is now among the Pepys papers. Petty explained to Robert Southwell that it was not a model of a 'real' ship, as it showed only one deck when the actual ship had two. Henry William Edmund Petty-FitzMaurice Lansdowne, The Double Bottom or Twin-Hulled Ship of Sir William Petty (Oxford: the Roxburghe Club, 1931), p. xvii.