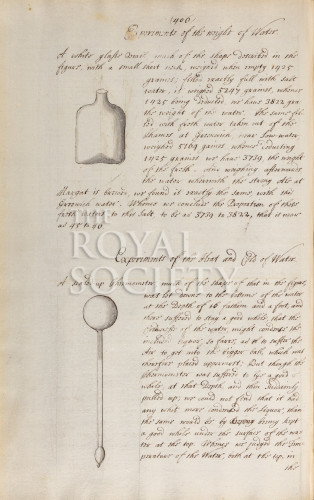 A white glass vial used in an experiment to determine the relative weight of salt and fresh water. This was one of a series of experiments conducted by William Brouncker, Robert Moray and Alexander Bruce on the river in Chatham in March 1663, and reported to the Royal Society on 18 March 1663.

Figure of a sealed-up thermometer, which was sunk to the middle and bottom of water at Chatham and measured for its condensation of liquor. No condensation was detected, from which it was judged by Fellows William Brouncker, Robert Moray and Alexander Bruce that the temperature of the water was the same at every level of the water. The result was read at the meeting of the Royal Society on 18 March 1663.

At the meeting of the Royal Society on 18 March 1663, ‘The lord viscount Brouncker, Sir Robert Moray, and Mr. Bruce brought in an account of the observations and experiments, which they had lately made upon the river of Chatham; and his lordship promised to add to them some notes of this own. The paper was ordered to be registered’ (Birch 1:208). The figures and the text are printed in Birch 1:208-12.

The figure of the glass vial was also printed in R. Hooke, Philosophical experiments and observations (London, 1726), p. 100.