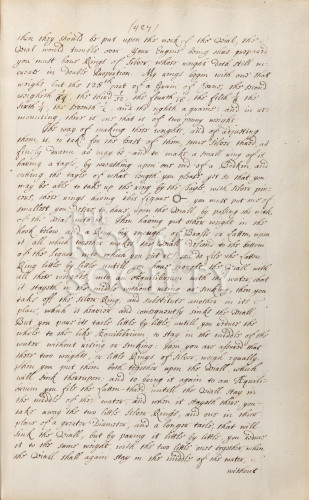 Measuring the difference of the weight of liquors

Small drawing within the text of a small ring made of silver thread to aid in measuring the difference of the weight of liquors, as explained by a French visitor, Balthasar de Monconys (1611-1675). Monconys published an account of attending meetings of the Royal Society in his Relation d’un Voyage en Angelterre (1664).

The way of making these weights, and of adjusting them, is, to take for the last of them, some silver thread, and finely drawn as may be; and to make a small ring of it having a tayle, by wreathing upon one and of a Bodkin, and cutting the tayle of what length you please, yet so that you may be able to take up the ring by the Tayle, with silver pincers, these rings having this figure [ ] ...
Transcribed by the Making Visible project

At the meeting of the Royal Society on 10 June 1663, ‘Mons. Monconys presented the society with two written papers of his; one containing a way of knowing exactly the difference of the weight of liquors, as he had shewed it at the preceding meeting; the other, describing the manner of ordering silk-worms in France. These papers were directed to be registered’ (Birch 1:256).

Birch notes that Monconys, Relation d’un Voyage en Angelterre (1664), pp. 76-86, explains that he was introduced to the Society by Sir Robert Moray, who placed Monconys next to himself and translated the proceedings into French for him. The former account, including the figure, was printed in Birch 1:257-58.