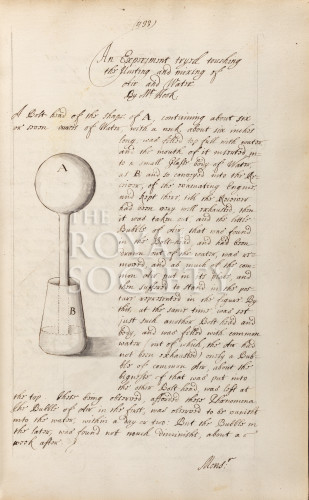 Glass instrument with a bolt head

At the meeting of the Royal Society on 1 July 1663, ‘Mons. Huygens’s experiment of purging water from air, to see whether it would subside, according to the Torricellian experiment, was made, but did not succeed; and was therefore ordered to be repeated at the next meeting. Mr. Hooke’s experiment for finding, whether the bubbles, that rise out of the water upon the emptying a receiver of the air, are real air, or only rarefied parts of water, was ordered to be repeated at the next meeting’ (Birch 1:268).

8 July 1663, ‘[Mr. Hooke] was ordered to give, in writing, the two experiments lately made concerning the bubbles remaining on the top of the water in glass balls, upon the emptying of the receiver; and the not subsiding of the water freed from air. The operator was ordered to get the long glass tubes raised against the next meeting’ (Birch 1:273).

16 July 1663, ‘Mr. Hooke brought in an account in writing of two experiments tried by the society, one concerning the uniting and mixing of air and water; the other concerning the suspension of defecated water in a bolt head after the receiver had been well exhausted. This account was ordered to be registered’ (Birch 1:274-75). Figure and text printed in Birch 1:275.