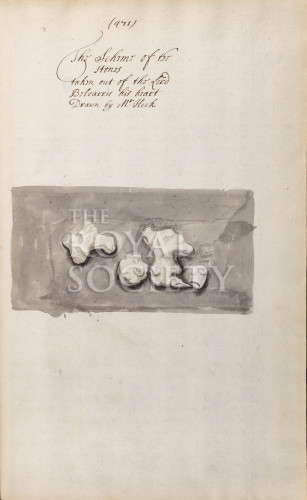 Stones from the heart of the Earl of Balcarres

Drawing of pieces of bone extracted from the heart of the second Earl of Balcarres, Charles Lindsay (1650–1662), whose parents (the first Earl of Balcarres, Alexander Lindsay (1618-1659) and Lady Anna Mackenzie (1621–1707)) were close to Robert Moray. The stones were shown in August 1663 when Moray suggested a drawing and a cast of them should be made. Robert Hooke was asked to do both, and his drawing was shown to the Royal Society on 19 August 1663. This is a copy of the original drawing (RBO/2i/290). The stones were donated to the Society in 1666. Another copy of the image can be found at MS/215/110.

At the meeting of the Royal Society on 15 April 1663, ‘Sir Robert Moray communicated an account in Latin, of the dissection made of the body of the Lord Belcarres, in whose heart was found two stones. The paper was ordered to be registered’ (Birch 1:219).

On 5 August 1663, ‘Sir Robert Moray produced again the stones taken out of the Earl of Belcarres’ heart and desired that the figure of them might be drawn; and Dr. Wilkins moved, that it might be taken in plaister; the care of both of which was committed to Mr. Hooke’ (Birch 1:292).

On 11 April 1666, ‘After this Sir Robert Moray presented the society with the stones taken out of the Lord Belcarres’ heart, in a silver box, together with a written account of the dissection of his body, attested by a physician and chirurgeon in Scotland, with this condition only, that in case the lady Belcarres, the deceased lord’s mother should send for it, it might not be denied her’ (Birch 2:81).