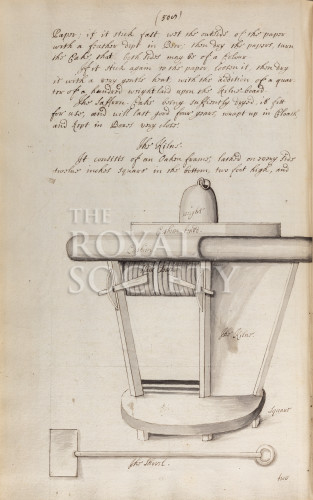 Drawing of a kiln and shovel to process saffron in a paper by Charles Howard (1630-1713), which he read before the Royal Society on 9 December 1663.

The kiln Howard donated to the Society is listed in Nehemiah Grew's catalogue of its Repository (1681).

At the meeting of the Royal Society on 4 November, 1663, ‘Mr. Howard mentioned something of the care taken by him for the propogating [sic] of saffron, and of several observations made by him concerning it; desiring, that some members of the society might be joined with him for the prosecution of this work. Whereupon Mr. Boyle, Mr. Evelyn, and Mr. Henshaw were desired to do so, and himself was requested his notes aforesaid to the society’ (Birch, 1:327).

2 December 1663, ‘Mr. Howard’s account of saffron was read; and upon his mentioning some additions, which he had ready to join to this paper, was desired to communicate them likewise.
He promised to produce before the society the kiln and other instruments employed for the ordering of the saffron’ (Birch 1:340).

On 9 December 1663, ‘Mr. Howard’s account of saffron was read again, because of the additions made by him since the last meeting. He also produced a saffron-kiln, and a cake, to be left with the Society. His paper was ordered to be registered’ (Birch 1:342).

The kiln is listed in Nehemiah Grew, Musæum Regalis Societatis. Or a Catalogue & Description of the Natural and Artificial Rarities Belonging to the Royal (London: W. Rawlins, 1681), p. 371.