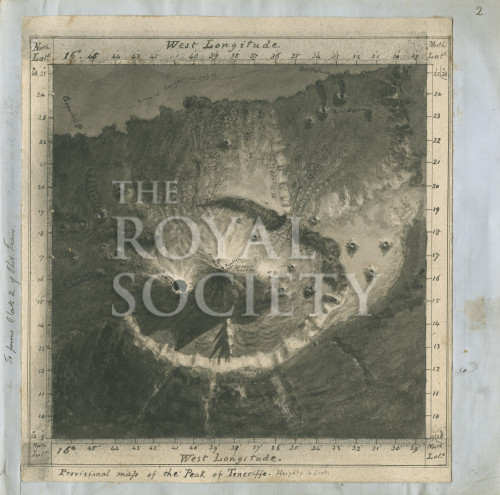 'Provisional map of the Peak of Teneriffe'

Map of the 'Peak of Teneriffe' [Mount Teide] and surrounding area, including Mount Blanca, Mount Guajara and the Port of Orotava.

Inscribed in ink on the left as viewed: 'To form plate 2 of Phil Trans.'

From the 'Tenerife Papers of Charles Piazzi Smyth', a scrapbook of watercolours and stereo plates from his 1856 astronomical expedition to this volcanic mountain range in Tenerife.

This particular watercolour features as plate XXXI in Smyth's paper 'Astronomical experiment on the peak of teneriffe, carried out under the sanction of the lords commissioners of the admiralty', published in the Philosophical Transactions of the Royal Society, vol. 148, 1858.

Donated to the Royal Society by Charles Piazzi Smyth, 1857.