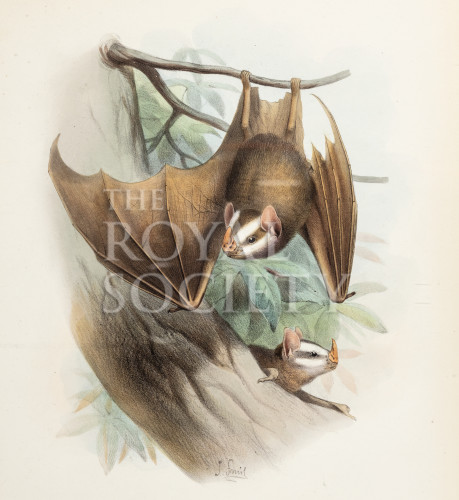 Zoological study of two Salvin’s big eyed bats, Chiroderma salvini, a species of bat from the Phyllostomidae family, found from southern North America to South America. The bats are depicted in their natural habitat, one hanging from a branch with wings out spread, the other in profile, perched on the trunk of a tree.

Table 4 from Biologia centrali-Americana; or, Contributions to the knowledge of the fauna and flora of Mexico and central America, the Mammalia volume, authored by Edward Aliston and co-edited by Frederick Du Cane Godman and Osbert Salvin.

Written in the associated text: ‘the ears are moderately large, the nose-leaf is well developed, and the lower lip has a triangular naked space bounded by two converging lines of small warts.’

Frederick Du Cane Godman (1834-1919) British entomologist and ornithologist, was elected a Fellow of the Royal Society in 1882.

Osbert Salvin (1835-1898) British naturalist and ornithologist, was elected a Fellow of the Royal Society in 1873.