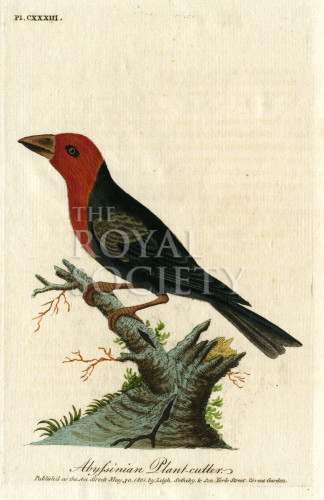 Ornithological study of the Black-billed barbet (Lybius guifsobalito) a bird native to Africa. Shown perched on a low tree branch.

Plate 133 from the Supplement. II. to the general synopsis of birds, by John Latham (London, Leigh, Sotheby & Son, 1802). The plate is inscribed above ‘Pl. CXXXIII.’; and below ‘Abyssinian Plant-cutter. Publish’d as the Act directs May 30, 1801, by Leigh, Sotheby & Son, York Street, Covent Garden.’

In the associated description, the author states: ‘This is the description given by M.Daudin, from a drawing sent him figures from a Nubian specimen: it seems to differ a little from that described by Buffon…M.Buffon described his from Mr. Bruce’s drawings done in Abyssinia, where it is said to be a solitary species, living on the kernels of almonds, the shells of which it easily breaks with the bill.‘