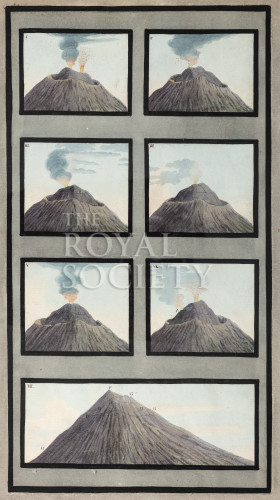 Seven views of the top of Mount Vesuvius captured over a four-month period.

Plate 2 from the Campi Phlegraei: observations on the volcanos of the two Sicilies by William Hamilton. Each figure is inscribed ‘I’ ‘II’ ‘III’ etc. [from left to right respectively] in the top corner.

Written in the associated description: ‘Plans of the Top of Mount Vesuvius with the gradual increase of the little mountain in its Crater from the 8th of July to the 29th of Oct.r 1767 [...] From May to October the 19th, the mountain increased in higth from B. to F. about 200 feet.’

This book of hand-coloured plates represents part II of Campi Phlegraei. It complements Part I, which consists of letters only. Both were presented to the then President of the Royal Society, Sir John Pringle (1707-1782).