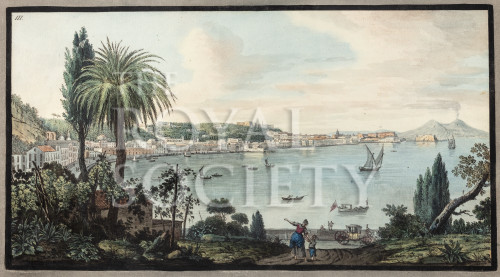 A view of Naples from Pausilipo. The sea is dotted with sailing boats, and the coastline in Naples covered in white houses. The Caste of Saint Elmo is visible in the middle of the scene, on top of a hill, and the Mountain of Somma and Mount Vesuvius are visible on the right [as viewed]. A woman and child look on from the shore.

Plate 3 from Campi Phlegraei: observations on the volcanos of the two Sicilies by William Hamilton. The plate is inscribed ‘III’ in the top left corner.

Written in the associated description: ‘Every view of Naples and its neighbourhood is beautiful, owing greatly to the variety in forms of the different elevations […] There is a great beauty likewise in the luxuriancy of the vegetation with which they are cover’d.’