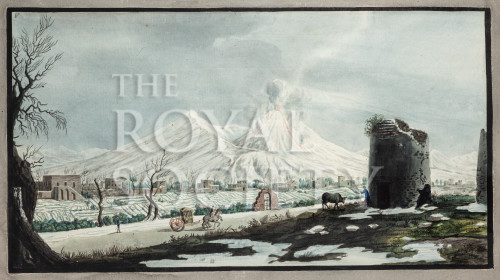 A view of an eruption of lava from the crater of Mount Vesuvius. The cone of Vesuvius is covered with snow, and the lava runs in different streams from the crater.

Plate 5 from Campi Phlegraei: observations on the volcanos of the two Sicilies by William Hamilton. The plate is inscribed ‘V’ in the top left corner.

Written in the associated description: ‘taken from an original painting of Mr. Fabris done from nature about 22. years ago. […]

The streams of lava that run down the steep flancks of the Volcano, always cut regular and narrow channels, so regular as to appear the work of art’.