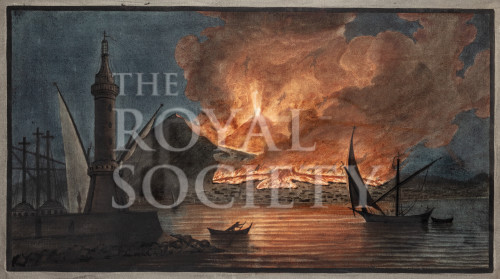 Night view of the eruption of Vesuvius on 20th October 1767, as seen from beside ‘The Mole’ lighthouse in Naples, visible on the left hand side of the plate [as viewed]. Sailing boats are visible in the foreground, while large plumes of reddish smoke fill the sky in the centre and right side.

Plate 6 from Campi Phlegraei: observations on the volcanos of the two Sicilies by William Hamilton. The plate is inscribed ‘VI’ in the top left corner.