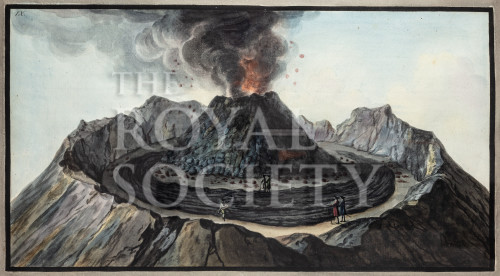 Interior view of the crater of Mount Vesuvius. Four figures are visible observing the crater; William Hamilton is painted within the landscape as the man in the red jacket.

Plate 9 from Campi Phlegraei: observations on the volcanos of the two Sicilies by William Hamilton. The plate is inscribed ‘IX’ in the top left corner.

Written in the associated description: 'Whilst the Volcano is in an active state, the crater changes its form perpetually, so that Travellers accounts of this part of the Volcano can seldom agree.'