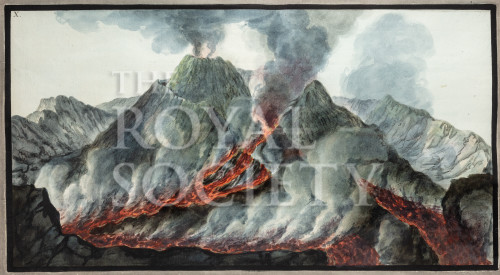 Interior view of the Crater of Mount Vesuvius, depicting numerous channels of lava and thick clouds of smoke. This plate is a copy of an original drawing made in the year 1756. It was intended to give an idea of the changes that the crater of the volcano was subject to over the years between 1756 and 1776.

Plate 10 from Campi Phlegraei: observations on the volcanos of the two Sicilies by William Hamilton. The plate is inscribed ‘X’ in the top left corner.

Written in the associated description: 'When the Volcano threatens an eruption, it is not adviseable to go into the Crater, as a sudden explosion often occasions great Cracks, or Chasms in the platform; and there is likewise danger from the sudden emission of stones, and sulphurious smoke.'