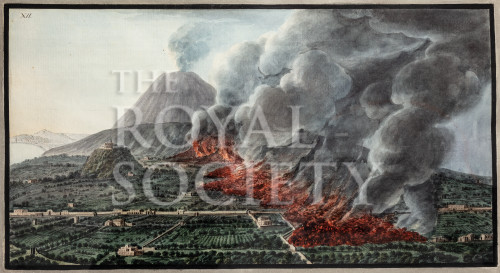 View of an eruption of Mount Vesuvius that began on 23 December 1760 and ended on 5 January 1761. Monte Sant'Angelo is visible on the left of the lava flow [as viewed]. This plate is based on a drawing by Pietro Fabris from the time of the eruption.

Plate 12 from Campi Phlegraei: observations on the volcanos of the two Sicilies by William Hamilton. The plate is inscribed ‘XII’ in the top left corner.

Written in the associated description: 'The object of this plate is to shew, that those who have asserted, that the seat of the fire is always towards the summit, or not lower than the middle of the Volcano, have been very ill informed.

These New Mountains are at least four miles from the summit of Vesuvius, and almost in the plain.'