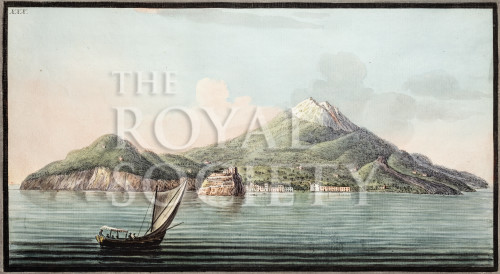 View of the island of Ischia from the sea. The castle of Ischia is visible on a peninsular in the centre, and the town just behind it. On the left [as viewed] are a range of little mountains, 'raised by former eruptions', and on the right is Monte S. Nicola [anciently Epomeus].

Written in the associated discription: 'There can be no doubt of the volcanick origin of this mountain [S. Nicola], composed as is the whole island, of strata of volcanick matter.'