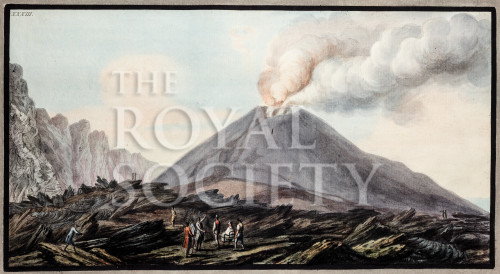 View into the valley of Atrio di Cavallo that lies between Mount Somma and Mount Vesuvius. Somma is just visible on the left [as viewed] and Vesuvius is depicted with plumes of smoke rising from its cone. Seven figures are visible in the foreground, one of whom is chaperoned on a litter.

Plate 33 from Campi Phlegraei: observations on the volcanos of the two Sicilies by William Hamilton. The plate is inscribed ‘XXXIII’ in the top left corner.

Written in the associated description: 'Valley through which the lava of the last three eruptions has taken its course: the rugged parts are the Scoriae of the lava, which have the appearance of a gigantick plowghed field.'