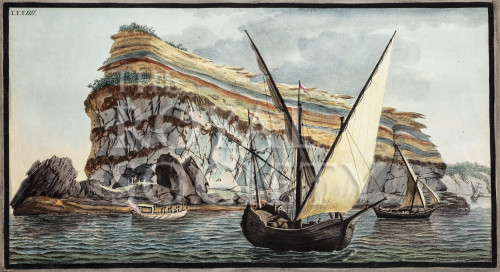 View of Capo dell'Arco, on the island of Ventotene. Various strata are visible on the rock surface, including tufa and volcanic ash, and a sailing boat is depicted in the foreground. Ventotene is an island about 4 miles in circumference, 30 miles from Ischia.

Plate 34 from Campi Phlegraei: observations on the volcanos of the two Sicilies by William Hamilton. The plate is inscribed ‘XXXIV’ in the top left corner.

Written in the associated description: 'The whole of this Island [Ventotene], and of that of S. Stefano, which is about a mile from it, (and probably once joined it, the Water being shallow between the one Island and the Other), have been evidently produced by Volcanick Explosions.'