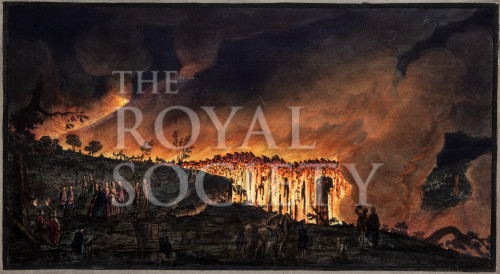 Night view of a current of lava as it runs from Mount Vesuvius towards Resina. Figures stand to the left of the blazing stream [as viewed], and plumes of smoke rise up to the right.

Plate 38 from Campi Phlegraei: observations on the volcanos of the two Sicilies by William Hamilton. The plate is inscribed ‘XXXVIII’ in the top left corner.

Written in the associated description: 'It [the lava] ran into the Valley, between Somma and Vesuvius, (see P. XXXIII) disgorged itself into a hollow way, formed a beautiful Cascade of fire of more than 50 feet perpendicular fall, and escaping pure and in its fluid state from under Scoriae, fell into the hollow way, and produced the finest effect, that can possibly be imagined.'