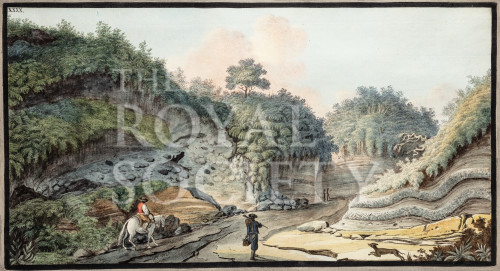 View of a hollow road leading from the Grotto of Pausilipo to Pianura. The road appears much like a quarry, with the walls on either side composed of volcanic substances including pumice stones, ash and lava. Two figures are visible in the foreground, travelling the road.

Plate 40 from Campi Phlegraei: observations on the volcanos of the two Sicilies by William Hamilton. The plate is inscribed ‘XXXVIII’ in the top left corner.

Written in the associated description: 'In all the hollow roads and ravines in this neighbourhood, of which there are many (and some exceedingly deep) the volcanick origin of the soil is plainly pointed out.'