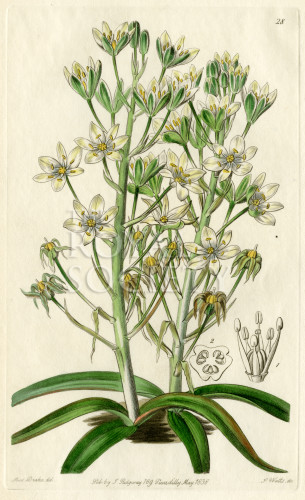 Botanical study of the Mediterranean ornithogalum Ornithogalum montanum, here referred to as the Mountain ornithogalum. The plant is native to southern Europe. The plate shows flowers and leaves, with two details of the stamens and ovary.

In the associated text, the author states that this is: ‘A hardy bulbous plant, for which I have to thank the Hon. W.F. Strangways, who has several times sent it from the choice collection at Abbotsbury…According to Signor Gussone it is a common plant, every where, in the mountain pastures of Sicily…Professor Tenore finds it in the kingdom of Naples…’

John Lindley (1799-1865) British botanist and horticulturalist, was elected a Fellow of the Royal Society in 1828.

Sarah Anne Drake (1803-1857), British botanical artist, was a long-term associate of the Lindley family and a prolific illustrator for James Lindley.