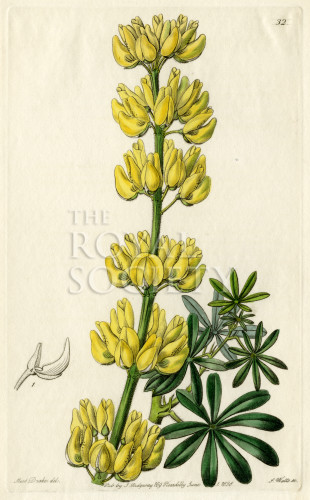 Botanical study of the Yellow bush lupine Lupinus arboreus here referred to as the Tree lupine. The plant is native to western regions of North America. The plate shows flowers and leaves, with one sectional detail of the flower.

In the associated text, the author states that: ‘There are many varieties in the gardens, one of the prettiest of which is that now figured from a seedling plant raised by the Earl of Mountnorris at Arley Hall…This species is said in books to be a native of South America, I know not upon what authority. It is probably a mistake, for Mr. Douglas found it in California…’

John Lindley (1799-1865) British botanist and horticulturalist, was elected a Fellow of the Royal Society in 1828.

Sarah Anne Drake (1803-1857), British botanical artist, was a long-term associate of the Lindley family and a prolific illustrator for James Lindley.