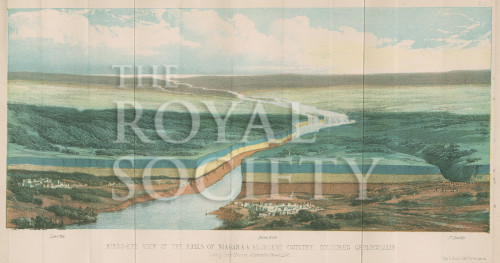 The fold-out frontispiece for Charles Lyell's Travels in North America', vol. 1. Travels was published in two volumes, and Lyell describes the making of this frontispiece in the closing of the second volume:

'Mr Bakewell Jun., son of the distinguished geologist of that name, gave me his original coloured sketches of the Niagara district in 1841. He had previously published an outline of them in some wood-cuts in ''London's Magazine'' for 1830... When I visited the Falls of Niagara in 1841, I conceived the idea of combining Mr. Bakewell's pictorial view with a correct geological representation of the rocks as determined by Mr. Hall, who accompanied me to the Falls'.

Robert Bakewell Senior (1767-1851) was a pioneer of geology in Britain; Robert Bakewell Junior (1792-1875) taught drawing at Yale College, and; James Hall (1811-1898), who accompanied Lyell in his journey to the falls, was a student of the Rensselaer Institute and known as the 'father of American paleontology'.