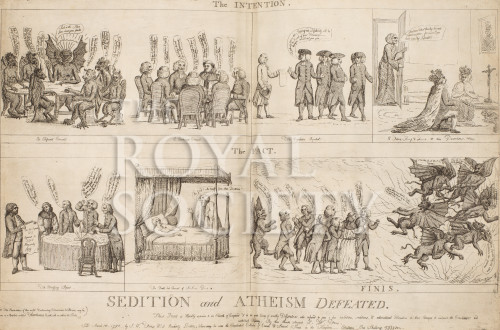 A print in two strips, the top titled ‘The intention’, the bottom titled ‘The fact’, each divided into three segments of unequal width. The print discredits Dissenting ministers and their attempts to repeal the Test and Corporation Acts.

In the upper strip, a group of devils are bragging that the Dissenters are their tools in promoting blasphemy and atheism, while a group of Dissenting ministers are portrayed as advocating violence. The two segments on the left of the lower strip accuse Joseph Priestley of promoting atheism, and suggest that this is the real intention of the repeal motion, and in the lower right segment a group of demons drag him and other Dissenting ministers to hell, defeated after its failure.

Inscribed below: ‘SEDITION and ATHIESM DEFEATED
This print is Humbly dedicated to the Church of England & to the great Body of worthy Disenters who refused to join a few ambitious, seditious & atheistical Ministers in their attempts to subvert the Constitution and establish Infidelity. By their Humble Servant S. W. Fores […]’

Joseph Priestley (1733-1804) British theologian and natural philosopher, was elected a Fellow of the Royal Society in 1766. Many of Priestley’s political writings supported the repeal of the Test and Corporation Acts, which restricted the rights of Dissenters.