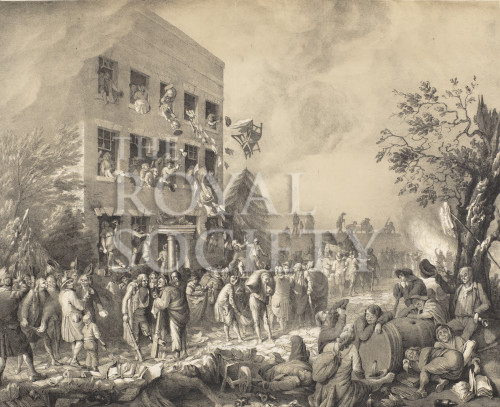 A depiction of the Priestley Riots, also known as the Birmingham Riots of 1791, specifically the attack of Joseph Priestley’s home at Fair hill.

Plumes of smoke frame the building and figures are visible throwing Priestley’s belongings - papers, globes, apparatus and furniture - out of its windows. In the bottom left corner [as viewed] figures loll around a barrel of beer, suggesting the intoxication of many of the assailants. A banner inscribed ‘CHURCH AND KING’ hangs from a tree.

Inscribed below: ‘DR. PRIESTLEY’S HOUSE & LABORATORY, FAIR HILL.
DESTROYED IN THE BIRMINGHAM RIOTS 14TH JULY 1791
From a Picture Sketched on the spot in the Posesion of Joseph Parkes’

Joseph Priestley (1733-1804) British theologian and natural philosopher, was elected a Fellow of the Royal Society in 1766. He was at the heart of the Birmingham riots, which targeted Dissenters, owing to his particularly controversial political and theological stance.

This volume was presented to the Royal Society in 1957 by the Priestley family.
Supported by the De Laszlo Foundation
Powered by MuseumIndex+ CollectionsOnline