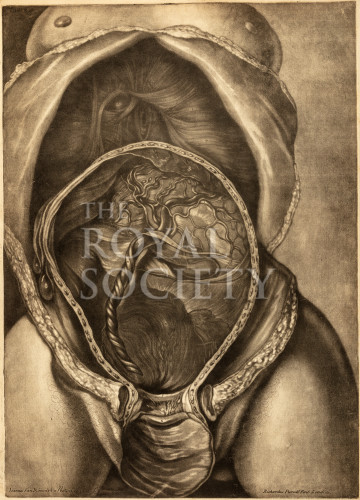 Anatomical study of the human uterus in the ninth month of pregnancy. It is shown with the foetus and endometrium removed, exposing the umbilical arteries and veins beneath. Above, the interior surface of the diaphragm is pinned back and displayed.

Plate 5 from Charles Nicholas Jenty’s The Demonstrations of a Pregnant Uterus of a Woman at her Full Time in Six Tales, as large a Nature. Jenty printed and sold copies of this work from his house on Fetter-Lane.

Written in the preface to the work: ‘The Originals of the tables were taken from this Woman by Mr. Van Riemsdyk, and not done at random, or from fancy […] As for my part, I may venture to say, that nothing of this kind has, as yet, been published on this subject in such a State of Pregnancy, and deposited in the manner that these tables are’

Charles Nicholas Jenty (fl.1758) was not a Fellow of the Royal Society.