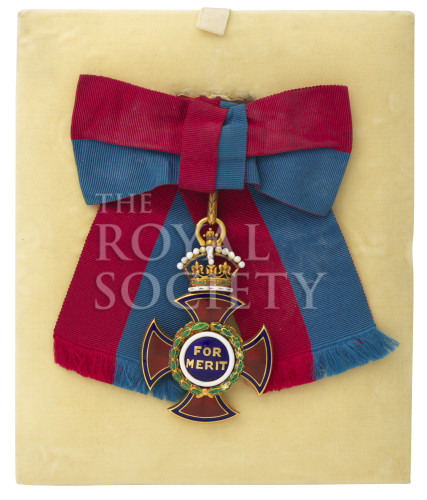 Dorothy Hodgkin's Order of Merit, with presentation ribbon and cushioned stand. The Order consists of a golden crown, a red enamelled cross, centred by a laurel wreath and disk of blue inscribed: FOR MERIT'.

The ribbon is divided into two stripes of red and blue and arranged in a bow. Women traditionally carried their Orders as a bow pinned to their left shoulder.

Dorothy Mary Crowfoot Hodgkin (1910–1994) British chemist and crystallographer was elected a Fellow of the Royal Society in 1947. In 1965 she was the second woman and the first in almost 60 years, after Florence Nightingale in 1907, to be appointed to the Order.

On loan to the Royal Society from the Hodgkin family.