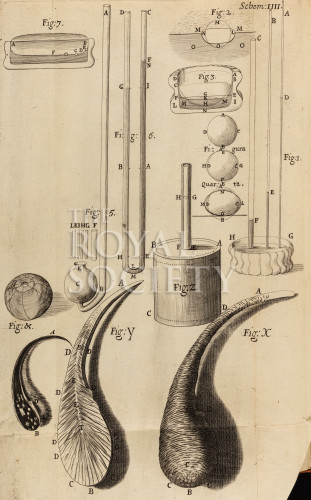 Microscopic study of toughened glass beads, or Prince Rupert’s drops. The beads were the result of dropping molten glass into cold water. In the top right [as viewed] are the thin glass pipes that were melted and in the bottom left are the glass beads themselves; tadpole-shaped droplets with a long thin tail.

The Prince Rupert drop was named after Prince Rupert of Rhine (1619-1682) who brought them to England in 1660. The Royal Society studied them as a scientific curiosity. Their description here highlights certain of their key properties, including: ‘That the parts of the Glass, whils in a fluid Consistence and hot, are more rarified or take up more room, then when hard and cold’ and a simultaneously ‘hard, brittle and springy texture’.

Plate 4 from Robert Hooke’s Micrographia: or some physiological descriptions of minute bodies made by magnifying glasses with observations and inquiries thereupon (1665), the first fully-illustrated book on the topic of microscopy. In the preface Hooke asserts that he had discovered ‘a new visible World’.