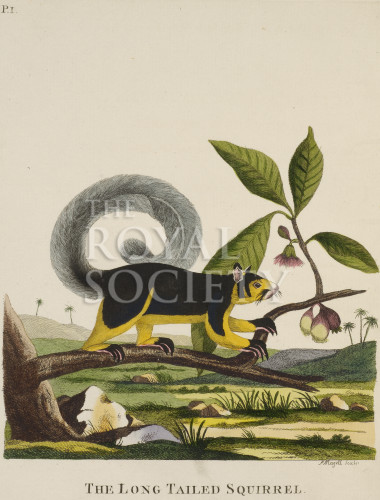 Zoological study of the Indian giant squirrel, Ratufa indica, referred to here as Sciurus macrourus, in right profile. It is shown perched on the branch of a tree bearing fruit and flowers, with its tailed curled over its body. Behind, a green landscape with palm trees is visible.

Written in the associated description: ‘The ears are tufted with black hairs: the end of the nose is pink-coloured: the cheeks, legs and belly, are of a dull yellow: between the ears is a yellow spot: the crown of the head, and the back, are black’.

Thomas Pennant (1726–1798), British naturalist, traveller, and writer, was elected a Fellow of the Royal Society in 1767. Best known for his published accounts of tours throughout the British Isles. He never travelled outside of Europe and his account of Indian Zoology was gleamed from drawings brought back by Joan Gideon Loten (1710-1789), a servant in the colonies of the Dutch East India Company and 29th Governor of Sri Lanka, then Ceylon.