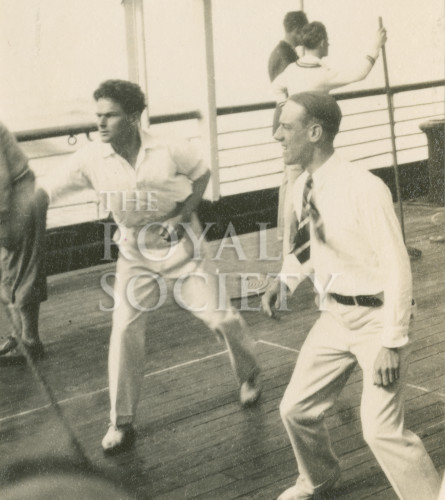 Scene showing passenger sports aboard the S.S. Minnekahda. The two central figures, playing as a team [at deck tennis?] are Philip Eggleton (left as viewed) and Brook [?] (right as viewed), in profile and half-profile, facing left. Behind, a pair of players, one in a cricket sweater holding a staff, probably a deck shuffleboard cue.

The image is inscribed in ink, verso: ‘P. Eggleton Brook Minnekhada 1929’. The ‘Velox’ photographic paper stamp also appears verso. From a collection of snapshots taken by Mary Pickford on board, captioned and donated by her.

Philip Eggleton (1903-1954) British biochemist and physiologist, was a Fellow of the Royal Society of Edinburgh.