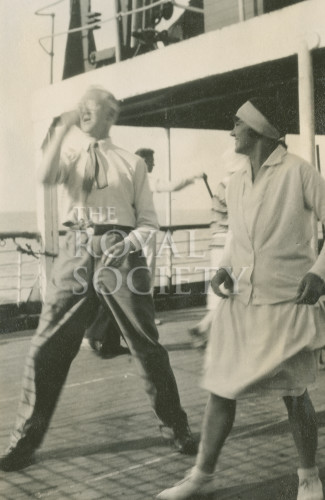 Scene showing deck tennis aboard the S.S. Minnekahda. The two players are Henry Dale (left as viewed) with one arm in action; and Kornélia Szent-Gyorgi (right as viewed), smiling in his direction.

The image is inscribed in ink, verso: ‘Minnekhada 1929 Sir Henry Dale & Mrs St Gyorgyi Deck Tennis’. From a collection of snapshots taken by Mary Pickford on board, captioned and donated by her. Backed with cardboard.

Presented by the Lillian Mary Pickford.