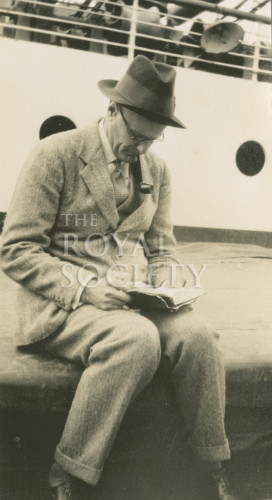 Full length portrait Walter Morley Fletcher, on the deck of the S.S. Minnekahda, seated, with his head bowed, reading a book. Fletcher wears a suit, hat and spectacles and is shown smoking a pipe.

The image is inscribed in ink, verso: ‘Minnekhada 1929 Sir Walter Fletcher’. From a collection of snapshots taken by Mary Pickford on board, captioned and donated by her. Backed with cardboard.

Sir Walter Morley Fletcher (1873-1933) British physiologist and administrator, was elected a Fellow of the Royal Society in 1915.