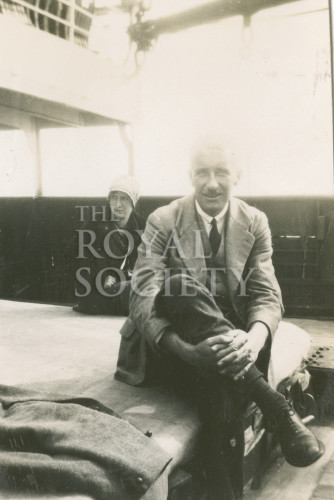 Full length portrait Archibald Vivian Hill, on the deck of the S.S. Minnekahda, with an unidentified woman behind. Hill is shown looking to camera, seated with his leg crossed and held at the shin with interlaced fingers.

The image is inscribed in ink, verso: ‘Minnekhada 1929 A V Hill’. From a collection of snapshots taken by Mary Pickford on board, captioned and donated by her. Backed with cardboard.

Archibald Vivian Hill, (1886-1977) British physiologist, was elected a Fellow of the Royal Society in 1918. He served as Vice-President, Foreign Secretary and Biological Secretary of the Society, winning the Nobel Prize for Physiology or Medicine in 1922.