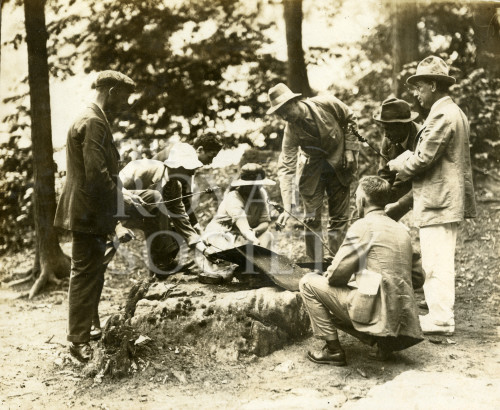 Scene at Niagara Glen, Ontario, Canada, showing a group of eight scientists [not all identified] gathered in woodland, around a barbecue or campfire, roasting food [mushrooms?] on sticks.

An account of the British Association gathering, by R D’O Good and A B Rendle, appeared in the Journal of Botany v.63 (1925), pp.1-9. ‘The second excursion comprised a week-end at Niagara Glen…where a canvas camp had been prepared for us by military authorities. Saturday was mainly devoted to a botanical ramble through the dense woods which line both sides of the gorge. The area is a government reserve, but Section K was permitted to botanize…’