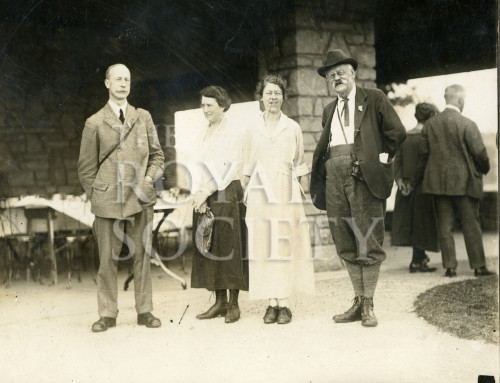 Scene at an unidentified building [possibly at Niagara Falls], in Ontario, Canada, showing a group of six scientists, four facing towards the camera, with table and chairs set behind them.

An account of the British Association gathering, by R D’O Good and A B Rendle, appeared in the Journal of Botany v.63 (1925), pp.1-9. ‘The second excursion comprised a week-end at Niagara Glen…On Sunday morning, through the kindness of the Mayor of St. Katherine’s, a small fleet of motor cars awaited us, in which we were driven to the Falls…The Vineland Experimental Fruit Farm was inspected and a visit paid to the Dominion Plant Pathology station at St. Katherine’s.’