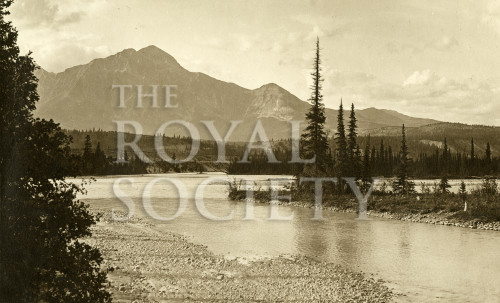 Landscape study showing Pyramid mountain and the Athabasca river, now within the Japer National Park in Alberta, Canada. The mountain was named after its shape by James Hector, a member of the Palliser Expedition exploring routes for the Canadian Pacific Railway in 1857-1860.

The image is from an album of original photographs, with postcards and other pictures collected during the British Association for the Advancement of Science meeting in Toronto, Canada, 1924. The album shows participants in activities of Section K: Botany. This page is inscribed below ‘PYRAMID MOUNTAIN and ATABASCA RIVER AT JASPER’.