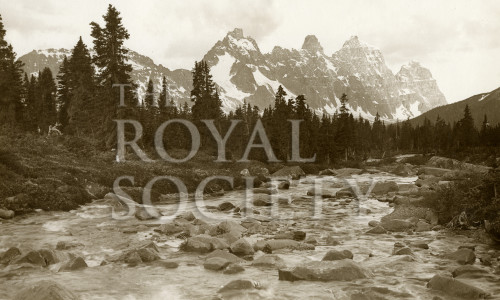 Landscape study showing four peaks of the Ramparts, a mountain range in the Canadian Rockies. The summits appear in the distance, beyond above a river and a conifer forest. The mountains were named after features of military engineering, with the exception of Geikie, named in honour of the geologist Archibald Geikie.

The image is from an album of original photographs, with postcards and other pictures collected during the British Association for the Advancement of Science meeting in Toronto, Canada, 1924. The album shows participants in activities of Section K: Botany. This page is inscribed above: ‘BASTION TURRET GEIKIE BARBICON’; and below ‘THE RAMPARTS [NEAR JASPER]’.